The highpoint of the Rencontres was undoubtedly the period from August 5 to 18, when the event kicked off at Carleton-sur-Mer with the unveiling of the Gaspésiennes project, and which was followed by 13 consecutive evenings of projections in an equal number of municipalities. Added to all this were public events and lectures in addition, of course, to exhibits that were held from August 5 to September 12.

« Gaspésiennes and Chandler, les portraits en papier are two projects that truly had a lot to say to the people of the Gaspé,” says executive and artistic director Claude Goulet. “The imposing mosaic of 30 committed women, of 30 good-hearted women in Sophie Jean’s and Jean-François Bérubé’s Gaspésiennes project, presented in front of Quai des arts in Carleton-sur-Mer, affected everyone who saw it. The same holds true for Chandler, les portraits en papier, a photographic installation by Dan Bergeron on the town’s water reservoirs, which was a wonderful tribute to the workers of the defunct Gaspésia Pulp & Paper Company.” 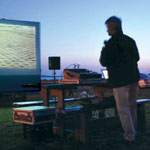 For this second edition, about twenty photo projections were presented on different buildings or attractions, attended by the guest photographers. This original general-public formula made extraordinary encounters and discussions possible between visitors, photographers and the local population, who were seeing their municipalities’ facilities put to use as they never had before, in the service of art.

With “Manifestation for the Memory of the Docks,” Maryse Goudreau carried on with her photographic activities on docks in the Gaspé, which she began last year in Carleton-sur-Mer and Marsoui.

Maryse Goudreau presented the installation Échantillon d’histoire (Sample of History), executed for Rencontres in the village of Matapedia. This work showcased the importance of rivers in the identity and history of the communities of Matapedia–Les Plateaux. And it offered us a new reading of the photographic image!

A true ULO (unidentified literary object), this multidisciplinary project, “Your Dictionary at the Ends of the Earth,” which contained literature, photography and music, brought together three Gaspesian artists as well as 132 texts in alphabetical order having to do with the Gaspé. To carry out the project, which he dedicated to his son, author Philippe Garon collaborated with more than 200 people, including Frédérick DeRoy for the photographs and Guillaume Arsenault for the music.

Very special places for get-togethers and discussion between the public and the artists, the lectures / photographic discussions enabled those attending to learn something about the photographers’ artistic approaches, and in so doing gain a better understanding of photography generally.

Opening evening of Rencontres with the photographers for this creation project carried out in the Gaspé, Jean-François Bérubé and Sophie Jean.

Pick the photo to create!